Have you been feeling too good lately?  When you look around at the world, does it seem too happy, safe, and congenial a place for your liking?  Would you like to feel more dismal about the state of your country, your fellow man?  Have you been trying to quit the Internet, looking to be driven offline, perhaps in despair?

Then, boy, do I have the book for you!  It’s not long, just a svelte 120 pages, but don’t worry!  There is enough disgusting human behavior in those 120 pages to fuel your misanthropy for the rest of your life. 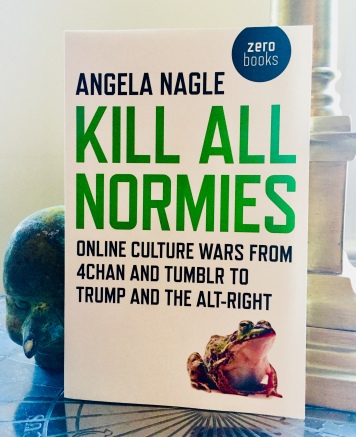 ‘ is Angela Nagle’s brief exploration of the once-fringe Internet subcultures which came to play significant roles in the 2016 United States presidential election.  Nagle frames these broadly as extensions of a broader culture war, starting in the 1960s, which saw the transgression against normal social mores as a goal, rather than as a tool, of social change.

‘ is a summary history of the online evolutions of the alt-right and identitarian far left movements in the United States.  She covers personalities, fora (Tumblr, Reddit, 4chan, &c), and specific events (Gamergate, Harambe).  She also explicates these phenomena within the cultural history of the United States, looks at how they relate to the political system in this country, and briefly discusses the critical texts which influenced them.  It is part history, part anthropology, part semiotics text.

And, from a humanist point of view, it’s gruesome.  If I didn’t think the end was nigh before I read this, I certainly do now.  Nagle covers, cursorily, the Manosphere, the Alt-Right and ethno-nationalism, Trump’s toxic Twitter army, Tumblr’s witch-hunty call-out culture, and the porny, hostile, insular world of 4chan.  I challenge anyone to read about those cultural infestations and still feel good about us as a species.

Nagle, it should be said, does not treat all these things as morally equivalent, and a denizen of, say, the Manosphere might take issue with her relative treatments (if he deigned to read books written by ‘holes’, that is).  She has a point of view, and she’s pretty upfront about it.  When she thinks something is revolting, she says so.  She openly deplores misogyny, racist rhetoric and attacks, threats, suicide encouragement, and homophobia.  She identifies as a feminist.

For all that, though, she is more even-handed than one might have expected her to be.  She faults both the left and the right for viciousness in the culture war.  She devotes an entire chapter to campus witch hunts from the left.

“At first, self-righteously or snarkily denouncing others for racism, sexism or homophobia was the most instantaneous and certain way to achieve social media fame.  Something about public social media platforms, it turned out, was conducive to the vanity of morally righteous politics and the irresistible draw of the culture wars.  But soon the secret was out and everyone was doing it.  The value of the currency of virtue that those who had made their social media culture capital on was in danger of being suddenly devalued.  As a result, I believe, a culture of purging had to take place, largely targeting those in competition for this precious currency.  Thus, the attacks increasingly focused on other liberals and leftists often with seemingly pristine progressive credentials, instead of those who engaged in any actual racism.” (p. 77

“I often think the brain drain out of the left during this period because of the Tumblrization of left politics has done damage that will prove long-lasting.” (p. 80

That Nagle has enormous contempt for this kind of hysterical, self-cannibalizing virtue-signaling is clear.  What is equally clear (in fact, explicit) is that she considers “actual racism” and misogyny much more dangerous.

“The alt-light figures that became celebrities during this period made their careers exposing the absurdities of online identity politics and the culture of lightly thrown claims of misogyny, racism, ableism, fatphobia, transphobia and so on.  However, offine, only one side saw their guy take the office of US president and only one side has in their midst faux-ironic Sieg Heil saluting, open white segregationists and genuinely hate-filled, occasionally murderous, misogynists and racists.” (p. 9

I was at least passingly familiar almost all of the cultural phenomena Nagle references, and, when I wasn’t, she gives enough of a sketch that I was able to place the reference in context.  I also have some experience reading criticism, and so I was able to grapple with some of the unwieldy and vague critical concepts that Nagle handles pretty casually.  In general, though, ‘Kill All Normies’ favors breadth over depth, and readers who don’t have a passing familiarity with famous Twitter flame wars or Nietzsche might find the pacing of the text a little difficult to follow.

Another problem is that Nagle writes like a journalist.  She’s great when it comes to shorter, declarative sentences, but when she’s handling more complicated material, she over-clauses and under-punctuates, which can make it hard to trace her antecedents and follow her argument.  ‘Kill All Normies’ is a book you’ll read for content, not for style (although some of her dry asides are really great, like this:

“The left’s best critic of this disease of the left had just died and dancing on his grave was a woman who once blogged about baking bread using her own vaginal yeast as a feminist act.” (p. 117

“The Men Going Their Own Way (MGTOW) movement is a straight male separatist group whose members have chosen (ahem) to avoid romantic relationships with women in protest against a culture destroyed by feminism” (p. 94

But content is a excellent reason to read, and this is important material.  I appreciated ‘Kill All Normies’ mainly for two reasons:

However, appreciating a book and enjoying a book are two different things.  I learned something from ‘Kill All Normies

‘, but it also ruined my week.  It is, at its heart, an exploration of a facet of my culture, a side of humanity in my time, which I find demoralizing: rancid, mean-spirited, venomous, and evil.  Even though it is a short text, an minute spent among the sort of bottom-dwellers who sent Anita Sarkeesian rape threats during Gamergate is like a year among the morally normal.  And one of the very frightening lessons of ‘Kill All Normies’ is that there are more people inhabiting the vile fringes of both sides than I, and perhaps you, had expected.

So it’s not a cheerful read.  It will probably make you feel worse about the world, about the people around you.  It’s the sort of book that makes you more suspicious, less trusting, and, in that way, perhaps a less good person for having read it.  This is not the fault of the author, obviously, but a logical result of the information that she is presenting.  And I believe that it is always better to confront the world as it is, not as we wish it to be, and if that upset us, well, bummer.  So I would recommend reading ‘Kill All Normies

‘, especially if you are interested in understanding the cultural or political moment a little better.

But brace yourself, ’cause it’s ugly.