The Chronicles of Barsetshire: First Volume

I have been longing for a project lately.  I want a long, slow walk through a complete world.  I want to immerse, to invest, in something.  I want to climb a mountain, literarily speaking.

And so, recently, when I was in my favorite used book store in Boston, Brattle Books, and saw a complete Folio Society printing of Anthony Trollope’s ‘Chronicles of Barsetshire’, you may appreciate how I felt: as though my mountain had chosen me. 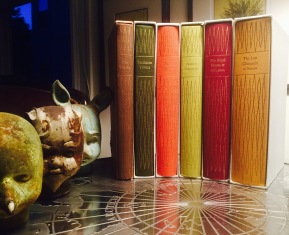 There are six Barsetshire novels: ‘The Warden

‘, ‘The Small House at Allington

‘, and ‘The Last Chronicle of Barset

‘.  Anthony Trollope is right in my sweet spot: prim, English authors whose novels satirize polite society in impeccable prose (don’t I sound fun?).  Once one of the most famous authors in the English-speaking world, he seems to have been largely forgotten.  When I told even my bookish, nerdy friends what I was planning to read next, the modal response was, ‘Who?’.

Part of the problem is that he wrote a lot – something north of 45 novels – and they all tend to blur together.  He is most famous for his two series, ‘The Chronicles of Barsetshire’ and the Palliser novels, and for the single novel, ‘The Way We Live Now

‘.  ‘The Chronicles of Barsetshire’ are the thing for which he was first known, and ‘The Warden

‘ is our introduction to Mr. Septimus Harding.  He is the warden of Hiram’s Hospital, which is an almshouse endowed hundreds of years before by one John Hiram.  The endowment (this is important) is meant to support 12 bedesmen which the community selects.  It also provides for the wardenship, which when the novel begins supports Mr. Harding very comfortably, to the tune of 800£ per annum plus his lovely house, where he lives with the younger of his two daughters, the cherished Eleanor. 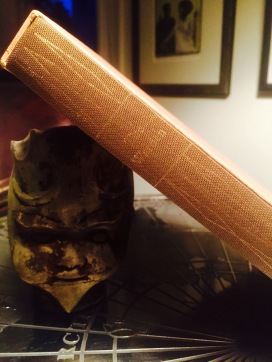 Trouble arrives on the scene in the person of John Bold.  Bold is a handsome young man whose independent means allow him to zealously pursue the interests of the poor, and he has decided that it is a scandal that the warden of Hiram’s Hospital should have 800£ a year – surely, Hiram intended his bequest to be split more equitably between the warden and his bedesmen.  To that end, Bold initiates a legal examination of Hiram’s will.

This is deeply distressing to the clerical residents of Barsetshire.  The archdeacon, who is Septimus Harding’s son-in-law by his elder daughter, feels that the entire Church of England is under assault, and wades into very polite battle.  Mr. Harding, on the other hand, is upset not by the threat to his living, but by the idea that he has been profiting by that to which he was not entitled.  He is sent spinning into a moral crisis which is only exacerbated by the fact that his daughter Eleanor is in love with John Bold.

The second loveliest thing about ‘The Warden

‘ is the way in which the stakes feel simultaneously so low and so high.  Barsetshire is a fictional place, but it is deeply plausible.  It is also completely coherent: the people within it are imperfect but well-meaning.  They may be officious, misguided, or bombastic, but they will never be evil.  It is an impossibility here.  Thus, while our protagonists experience this kerfuffle over Hiram’s bequest as a moral emergency, and while you feel for them in their extremis, you are aware that it is not an emergency, not really, that whatever the outcome, Barsetshire will endure.

The first loveliest thing about the novel is the language.  Trollope is especially good at wielding that peculiar weapon of English satirists: parsimony, the gift of saying a great deal in very few words.  It allows him to describe people or situations perfectly, as here:

“Dr Grantly is by no means a bad man; he is exactly the man which such an education as his was most likely to form; his intellect being sufficient for such a place in the world, but not sufficient to put him in advance of it.” (p. 40

“And with a volley of impassioned love, John Bold poured forth the feelings of his heart, swearing, as men do, some truths and many falsehoods; and Eleanor repeated with every shade of vehemence the ‘No, no, no,’ which had had a short time since so much effect; but now, alas! its strength was gone.  Let her be never so vehement, her vehemence was not respected; all her ‘No, no, no’s’ were met with counter asseverations, and at last were overpowered…and so at last, all her defences [sic] demolished, all her maiden barriers swept away, she capitulated, or rather marched out with the honours of war, vanquished evidently, palpably vanquished, but still not reduced to the necessity of confessing it.” (p. 137

I’ll throw down this bet: fifty bucks says that there is no better, pithier encapsulation of the tricky ardor of men than “swearing, as men do, some truths and many falsehoods”.  Or a better description of the moment you know you’re going to say Yes and not No than that you “marched out with the honours of war, vanquished evidently, palpably vanquished, but still not reduced to the necessity of confessing it.”

‘ is the shortest of the six volumes; some of the later volumes could easily be used to club someone to death.  But I’m excited – I think I’ve chosen my project well.  Barsetshire is low stakes, but it suits me: a small, ordered, and lovely world, where the troubles of men are worked out under an unsparing, and yet ultimately forgiving, eye.