I’m beginning to suspect that all Margaret Atwood’s books are really just about how terrible men are.

Certainly, that’s what ‘The Handmaid’s Tale

‘ is about.  It’s pretty much what ‘Oryx and Crake

‘ is about.  It’s kind of what ‘The Blind Assassin

‘ is about, although I’ll grant that is a fuzzier case.

But it’s definitely what ‘Alias Grace 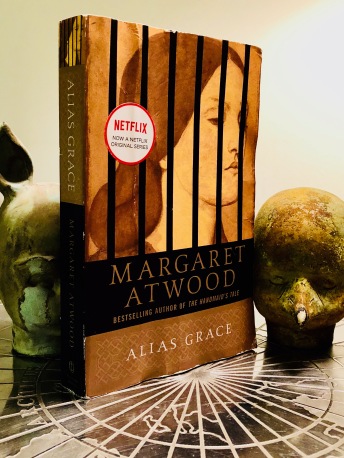 Not superficially, of course.  ‘Alias Grace

‘ is the story of Grace Marks, convicted at the age of 16 of murdering her employer, Thomas Kinnear, and his head of household (and lover), Nancy Montgomery.  She allegedly commits this murder with the help of her lover, James McDermott, who is hanged for the crime.  Grace, in view of her youth, is given a life sentence.

Most of the novel takes place many years into her imprisonment, during her extended examination by Dr. Simon Jordan, who is a specialist in diseases of the mind.  It is the story of her life (from her questionable perspective), of her relationship with this doctor, of his obsession with her, and of the murders themselves.  It is a mystery of guilt or innocence.

But, really, it’s a long indictment of men, of male power and the abuses it rains down upon women who are powerless.  It is about doctors who grope during examinations, employers who rape their servants, institutions which incarcerate women who do not conform, men who defame women who will not sleep with them, abortionists who kill women without consequence.

I’m not exaggerating this theme, and it is not subtle.  Take, for example, this discussion of quilts, which Grace is forever sewing and on which she is forever discoursing:

“…when we’d hung a half-dozen of them up on a line, all in a row, I thought that they looked like flags, hung out by an army as it goes to war.

And since that time I have thought, why is it that women have chosen to sew such flags, and then to lay them on the the tops of beds?  For they make the bed the most noticeable thing in a room.  And then I have thought, it’s for warning.  Because you may think a bed is a peaceful thing, Sir, and to you it may mean rest and comfort and a good night’s sleep.  But it isn’t so for everyone; and there are many dangerous things that may take place in a bed.  It is where we are born, and that is our first peril in life; and it is where the women give birth, which is often their last.  And it is where the act takes place between men and women that I will not mention to you, Sir, but I suppose you know what it is; and some call it love, and others despair, or else merely an indignity which they must suffer through.” (p. 161

Of course, Margaret Atwood is a marvelous storyteller; she always has been.  She has an eye for detail, for immersion.  It’s easy to lose yourself in her books: I sat down and read ‘Alias Grace

‘ in one long layover in Tokyo, and I was honestly in more danger of developing thrombosis from reading this book than I was in the 12 hour flight that followed it.  That’s a strong recommendation for any novel.

But there is something about Atwood which always makes my teeth hurt a little, something irritating right at the edge of her writing.  Perhaps it is a lack of irony.  There is a lyrical quality to her prose, a sort of sing-songing free association in her descriptions, which can be enormously effective, but which more often annoys me badly.

Here, for example, is a passage where I think that writing style works really well:

“The season has now officially changed: Lydia has burst into bloom.  Layers of pale floral ruffling have sprouted all over her, and wave from her shoulders like diaphanous wings.  Simon eats his fish – overdone, but no one on this continent can poach a fish properly – and admires the smooth white contours of her throat, and what can be seen of her bosom.  It’s as if she is sculpted of whipped cream.  She should be on the platter, instead of the fish.  He’s heard stories of a famous Parisian courtesan who had herself presented at a banquet in this way; naked, of course.” (p. 193

Here, though, is an example of that writing style which makes me want to run screaming from the room:

“It’s the middle of the night, but time keeps going on, and it also goes round and around, like the sun and the moon on the tall clock in the parlour.  Soon it will be daybreak.  Soon the day will break.  I can’t stop it from breaking in the same way it always does, and then from lying there broken; always the same day, which comes around like clockwork.  It begins with the day before the day before, and then the day before, and it’s the day itself.  A Saturday.  The breaking day.”  (p. 295

I understand that this passage is supposed to communicate the maddening monotony of an imprisoned life, but I’ve never really liked expression by reader-punishment like this – just because my protagonist is suffering should not mean that I must, too.

And then there is the problem of the resolution.

It’s always disappointing when endings and books don’t match, when a well-developed and richly imagined book purchases its end with implausible plot theatrics.

A general rule of mine: there are, I think, a few plot mechanisms which, if you find yourself using them, always mean that you need to re-think your storyline.  They signal lazy craft – they are cheap.

These plot developments include (but are not limited to): secret brother-sister incest (I’m looking at you, ‘August: Osage County

‘), a secret twin (excusing ‘The Prestige

‘, which pulls it off and (little known fact) is a book!), and a protagonist with undiagnosed Multiple Personality Disorder.

‘ strongly implies that Grace Marks, at the time of the murders, is under the control of an alternate personality, that of her dead friend, Mary Whitney, whose death (at the hands of a back-alley abortionist, of course) was traumatic for Grace.  And, just to add fuel to the trashy fire, this fact is brought to light while she is under hypnosis.

Resolving a murder mystery via multiple personalities is, in my opinion, totally bogus.  ‘Alias Grace

‘ is a subtle, thorough story, based on a real person who almost certainly did not have multiple personalities.  Until that session of hypnosis, it was a complex novel about power, and rage, and friendship, and love, what it means to be guilty and whether we can ever see how the world looks through another person’s eyes and how slippery the truth can be.

And then it resolves all that lovely moral ambiguity with the sort of plot device that you expect to see in an episode of Criminal Minds.  It was very disappointing.

None of which, obviously, kept me from turning its pages like it was the last book on Earth.  That’s Atwood for you – whatever your complaints about her, she’s tough to put down.