Secrets and Lies in a Silicon Valley Startup

I imagine that one of the drawbacks of being a journalist that is that, in real life, villains are thin on the ground. 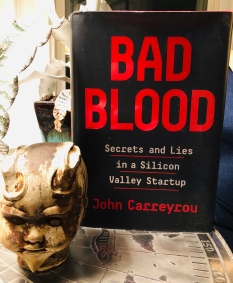 Writers of fiction can conjure a villain whenever they want, and drape him in the accoutrement of evil.  He can wear a poisoner’s ring; his literal fangs can drip literal blood; flowers can wilt at his approach – no problem at all for a writer of fiction.

But journalists are, at least hypothetically, bounded by truth, and the truth is: most humans are not villains.  None are perfect, most are complicated, many are bad, but very, very few are truly wicked.

There are exceptions, of course.  Every once and a while, a thorough-going monster hoves into view, and a lucky journalist discovers it.  I can only imagine that those discoveries are the journalistic scoops of a lifetime, the exposure of a real-life Iago in our midst.

Which makes me suspect that John Carreyrou must have just about shit a brick when he realized that he had discovered one.  He seems like a Very Serious Journalist, so I’m sure he was super professional about it, but I’ll bet that, in his secret heart of hearts, when he realized what it was that he had found, he did little, private journalistic leaps for joy.

Because he found a genuine villain.  A real one.  He discovered a villain, and he discovered her when everyone else thought that she was hot stuff.  He exposed her.

I remember when the Wall Street Journal published their first Theranos exposé.  It was the first I had heard of Theranos, but I remember thinking that the description of the technology sounded…optimistic.  I remember wondering about Elizabeth Holmes, about whether, if the Wall Street Journal allegations were true, she had known.  CEOs often do not know about the specific actions of their scientific staff, I knew.  Perhaps she had been ignorant.

‘ is the story of Elizabeth Holmes and the company that she founded, Theranos.  Theranos’ mission statement was simple: comprehensive, rapid blood-testing from finger-pricks, rather than intravenous blood-draws.  Holmes had a fear of needles, as she famously explained during pitches, and she wanted to spare patients the stress of them.  She wanted to make blood-drawing so quick, so painless, that no one ever lost a loved one to a condition which might have been caught by a blood test.

At no point during its existence did Theranos possess the technology to do this.  However, their lack did not stop Holmes from promising her investors that they did, from producing prototypes, from entering into partnerships with pharmaceutical companies, and from testing on patients.  At its peak, Theranos was valued at over $50 billion, and was running tests in Walgreens on actual humans.

I’m not sure quite how to express how convincing, unrelenting, and shocking ‘Bad Blood

‘ is.  Even for a cynical person (which I am), the amount of bad faith, of systematic dishonesty, displayed by Holmes and her vice-president (and boyfriend) Sunny Balwani, was enormous.

And, what’s worse, when their employees called them on it, told them that their machines couldn’t meet quality controls, or that their results couldn’t be replicated, weren’t matching the control samples, they fired those employees, threatened them with lawsuits, and even, in some cases, blackmailed them.

Perhaps you find it slightly incredible that a book about what is, essentially, a medical device company lying about the precision of blood tests would be fascinating.  But fascinating isn’t even an adequate term – this is a page-turner.  ‘Page-turner’ is an over-used term, so I would like to take just a second to explore what that term is actually supposed to mean, to explain how I am using it.

A page-turner is a book which demands that you turn its pages.  Some books you move in and out of at leisure, it is up to you whether you are reading them or not.  You may love them, and appreciate them very much, but they don’t call to you when they’re closed.

But some books are not up to you.  Some books require a sort of devil’s bargain: once you start them, they own you until you finish them.  They shout at you when you’re not with them, and you move through your life with half your mind, because the other half of your mind is forever grasping back to where you left the book.

That’s what ‘page-turner’ means – it means that it isn’t up to you who turns the pages.  And ‘Bad Blood

‘ is a page-turner by that definition.

(And a contagion – I read it when a friend from my old lab at MIT told me that she had read it in one sitting, when she insisted that I read it.  I read it in one sitting on a train to visit my parents – when I disembarked, I told my mother about it, and she then spent that evening reading late into the night.  She had finished it when I woke up the next morning.  I have given it to at least three people since.)

I should be clear: partly, ‘Bad Blood

‘ is so absorbing because it isn’t really a book, not in the artistic sense of the word.  It’s a case for the prosecution.  Carreyrou is a good journalistic writer; his prose conveys information without getting in the way.  His meticulousness shines through the words – he is totally convincing.  He is also, I think, furious (the last section of the book details Holmes’ attempt to destroy him personally), and that also shines through the words.  But, in this case, words and personality don’t equal literature – they equal a plot, a gripping story, one of those rare books which is more like a movie than printed word.

And, because I believe that it is true, I recommend it highly.  These examples of far-out villainy, they are rare in real life.  We are lucky in that.  But, it is rarer still that they are so well-documented, so thoroughly illuminated and detailed.  And we are even luckier in that, when it happens.  Because, rare though they are, they are real, and it’s worth taking a real hard look at them, every once and a while.

One thought on “Bad Blood”