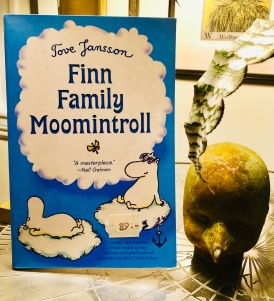 “One grey morning the first snow began to fall in the Valley of the Moomins.  It fell softly and quietly, and in a few hours everything was white.”

Fall is here, and I’m sure you know what that means:

I’m not sure why it is that this time of year always draws me back to this book from my childhood, why the gray, chilly days remind me of the strange, bleak world of Moomin Valley.  Whatever the reason, I rarely make it to Thanksgiving without re-reading ‘Finn Family Moomintroll

The Moomin books are Swedish (written by the Swedish-speaking Finnish author Tove Jansson), and they are quite famous there (there is actually a Moomin house, in Finland), but to my consternation, most Americans are unfamiliar with the Moomintrolls.  There are nine Moomin books, of which ‘Finn Family Moomintroll

‘ is actually the third.  But it is my favorite of the books, the one I think best captures the sweet, weird, sad tone of them.

The Moomins are a family of hippopotamus-like bipeds.  Moominpappa, Moominmamma, and their son Moomintroll live in Moomin Valley, in a turret-house which is always filled to capacity by the various friends and hangers-on that they acquire during their travels.  They are accompanied most of the time by their neighbors the Snork and the Snork Maiden, also hippo-like.  Other frequent allies include the Humulen, the Muskrat, Snufkin, Sniff, Thingumy and Bob.

In small bands or all together, the Moomins have small adventures and tribulations.  The chapters of ‘Finn Family Moomintroll

‘ have descriptors like, “In which Moomintroll suffers an uncomfortable change* and takes his revenge on the Ant-lion, and how Moomintroll and Snufkin go on a secret night expedition” or, “In which Thingumy and Bob, bringing a mysterious suitcase and followed by the Groke, come into the story, and in which the Snork leads a Court Case“.

*This is NOT puberty – this is a transformation wrought by the Hobgoblin’s Hat.

All of which adventures are accompanied by little pen and ink drawings, done by the author herself, and which constitute easily the most charming part of the entire series.

If this all sounds too precious, it’s not.  It’s true: ‘Finn Family Moomintroll

‘ has all the necessarily ingredients of a delightful children’s book: whimsical creatures, adventures with high stakes but good outcomes, magic, humor, and an essential sweetness.  It is lightly eccentric, and quite funny.

“Next morning the Muskrat went out as usual with his book to lie in the hammock, but he had just gotten comfortable when the string broke and he found himself on the ground…

‘Oh, dear,’ said Moominpappa, who was watering his tobacco plants.  ‘I hope you didn’t hurt yourself?’

‘It isn’t that,’ replied the Muskrat gloomily sucking his moustache.  ‘The earth can crack and fire come down from heaven for all I care – that sort of thing doesn’t disturb me – but I do not like to be put into a ridiculous situation.  It isn’t dignified for a philosopher!’…

‘I know, I know,’ interrupted Moominpappa miserably.  ‘But there’s no peace in this house…And sometimes string wears out with the years you know.’

‘It must not,’ said the Muskrat.  ‘If I had killed myself, of course, it wouldn’t have mattered.  But imagine if your YOUNG PERSONS had seen me! Now, however, I intend to retire to a deserted spot and live a life of loneliness and peace, giving up everything.'” (p. 45 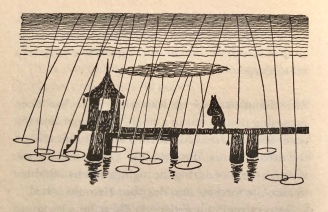 But good humor is not the most salient attribute of the Moomin books.  I think that the reason why they have worn so well, why I return to them year after year, is that they are melancholy.  There is a sad cast to them which I can’t pin down, a forlorn air which hangs over their adventures.  I find this inexpressibly moving; long after I have outgrown the whimsy of the books, I come back to this same still, quiet sadness.

It’s difficult to say where the sadness comes from.  It lurks in there, in the Hobgoblin’s endless, fruitless quest for the King’s Ruby, which has taken him finally to the blasted out and lonely landscape of the moon.  It’s in Snufkin’s need to set out on long journeys, but always alone, because it is only alone that he is really himself.  It is there in the Humulen, devastated by the completion of his stamp collection, because, as Moomintroll says, he is no longer a collector, now merely an owner.  There is something low and sorrowful here.

‘, to my mind, a rather perfect little book:  it’s also creepy.

As I have mentioned before, creepiness is, for me, a requirement in children’s literature.  ‘Finn Family Moomintroll

‘ isn’t ghost-story creepy; rather, it’s sort of weird-creepy, touched by a pall of uneasiness which lies over the whole story, over all of Moomin Valley.  There is a sinister whisper behind everything, which rarely comes out into the light but does occasionally, as in the character of the Groke:

“Then – they saw the Groke.  Everybody saw her.  She sat motionless on the sandy path at the bottom of the steps and stared at them with round, expressionless eyes.

She was not particularly big and didn’t look dangerous either, but you felt that she was terribly evil and would wait forever.  And that was awful.” (p. 116

The effect is sort of mesmerizing, this strange, happy story with it’s sad, ominous undercurrents.  The stories aren’t swashbuckling-exciting, but because the creatures are so original, and because the narrative voice is so unusual, they are completely absorbing.  And even though the language is simple, clearly meant for children, the tone is subtle enough that, as adult reader, you still feel overcome by the story.  Moomin Valley exists for me, an eerie place, known and unknown, safe yet spooky, filled with ambivalent little creatures hiding in strange and unexpected places.

I always feel so incompetent at moments like this, when I try to describe the effect a beloved book has had on me.  The books are so much better than my descriptions of them will ever be – you cannot describe better, in words, an accomplishment of words.  And words are insufficient, too, for my feelings: I cannot paint for you, quite, the feelings which Moomin Valley evokes in me.

So I will leave you, instead, with the words of the book itself, with the sure knowledge that, if this can’t charm you, nothing can:

“While the Hobglobin was eating they edged a little nearer.  Somebody who eats pancakes and jam can’t be so awfully dangerous.  You can talk to him.” (p. 145