The Chronicles of Barsetshire: Second Volume

‘ is the second novel in Anthony Trollope’s ‘Chronicles of Barsetshire’.  The first, ‘The Warden

‘ (reviewed here), is the short little tale of Septimus Harding, a kind-hearted Anglican clergyman, and how he came to resign his post as warden of Hiram’s Hospital.  The end of ‘The Warden’ found Mr. Harding poorer in his income but clearer in his conscience, and his beloved daughter Eleanor married to John Bold, the man who unfortunately instigated Mr. Harding’s removal.

As I mentioned, ‘The Warden

‘ was low-stakes and leisurely, a sweet story about sweet people who all mean well.  There were no villains, and no true fools.  It was difficult to sustain a sense of outrage against anyone when Mr. Harding himself couldn’t, and no character who would not be welcomed to tea by any other.  Everything ended well, and everyone was forgiven.

This second novel is made of stiffer stuff. 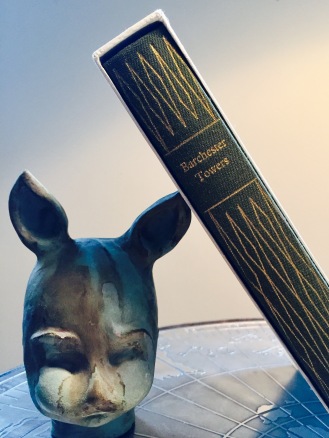 ‘ opens with two deaths.  The Bishop Grantly of Barchester has died; he was the best friend of Septimus Harding, and the father of his son-in-law, the Archdeacon Grantly of Plumstead.  The Archdeacon was a figure of minor dramatic tension in ‘The Warden’ – he will become a hero in ‘Barchester Towers’.  He is married to Mr. Harding’s elder daughter.

Meanwhile, John Bold, major protagonist of ‘The Warden’ and married to Harding’s younger daughter Eleanor, has been summarily snuffed out between books.  I’m not sure that we are even told how he perished; all that matters now is that Eleanor is a young, attractive widow of means, vulnerable to the unscrupulous.

And the unscrupulous are upon us.  ‘The Warden

‘ has two villains, both brought by the new Bishop of Barchester: the unctuous and despicable chaplain Mr. Slope, and his patroness, the over-zealous, over-bearing harridan wife of the new Bishop, Mrs. Proudie.

‘ ostensibly continues to follow the travails and fortunes of the Hardings: whether Mr. Harding will be re-appointed to the wardenship of Hiram’s Hospital and whom Eleanor will remarry.  However, the novel’s heart really lies in the battle between it’s two new Goliath’s: Archdeacon Grantly and Mrs. Proudie.  They are the standouts here, the best-drawn characters by far, and clearly the favorites of their author.  Take, for instance, this quietly magnificent passage about Archdeacon Grantly:

‘Now there was something peculiarly unorthodox in the archdeacon’s estimation in the idea of a round table…He connected them with what he called the nasty new fangled method of leaving a cloth on the table, as though to warn people that they were not to sit long.  In his eyes there was something democratic and parvenue in a round table.  He imagined that dissenters and calico-printers chiefly used them, and perhaps a few literary lions more conspicuous for their wit than their gentility…”A round dinner-table,’ said he, with some heat, “is the most abominable article of furniture that ever was invented”.’ (p. 180

Or this aside about Mrs. Proudie:

‘It is ordained that all novels should have a male and a female angel, and a male and a female devil.  If it be considered that this rule is obeyed in these pages, the latter character must be supposed to have fallen to the lot of Mrs. Proudie.  But she was not all devil.  There was a heart inside that stiff-ribbed bodice, though not, perhaps. of large dimensions, and certainly not easily accessible.’ (p. 227

These are expert characterizations: efficient and droll.  Trollope lives in his characters; in fact, he has imagines them so richly that he has come to love them.  I think that is why (by his own description above) he writes no truly evil villains: he can’t write someone and not forgive them, not offer them redemption.  But this emotional investment means that he is really at his best when he leans into character development, when he gives his characters time and space to display themselves and all their strange idiosyncrasies fully.  This makes him less quotable than other writers of his ilk, though he is just as witty; he only occasionally produces the arch epigrams for which English writers are so well known. When he does produce them, though, they are excellent:

‘There is, perhaps, no greater hardship at present inflicted on mankind in civilised and free countries, than the necessity of listening to sermons.’ (p. 53

‘A man must be an idiot or else an angel, who after the age of forty shall attempt to be just to his neighbours.’
(p. 328

However, despite the fact that ‘Barchester Towers’ has both heroes and villains, it doesn’t have much in the way of plot.  As mentioned above, there is the minor drama of Eleanor’s second marriage; there is the vague menace that she will be somehow tricked in marrying the odious Mr. Slope, but no one believes that she will and no one (including, I suspect, Trollope) really cares.  Most of the action of the book centers around the goings-on of our two new villains, Mr. Slope and Mrs. Proudie, their clerical battle with the Archdeacon, and their integration into the quiet community of Barchester.

This plotlessness didn’t really detract from my enjoyment of the back.  In fact, I liked ‘Barchester Towers

‘ a lot more than I liked ‘The Warden

‘.  The first was a very earnest book about goodness and conscience; the second is a book about manners, and wickeder entirely.  ‘Barchester Towers’ is the funnier of the two, by far, and has the superior cast of characters.

Which is not to say that it lacks sweetness.  While ‘The Chronicles of Barsetshire’ are satires, they are very gentle, and they are, after all, about a group of English clerics endeavoring to do their best.  And Trollope himself is prone to small moral excursuses which, in my opinion, are humane and charming:

‘How much kinder is God to us than we are willing to be to ourselves!  At the loss of every dear face, at the last going of every well beloved one, we all doom ourselves to an eternity of sorrow, and look to waste ourselves away in an ever-running fountain of tears.  How seldom does such grief endure! how blessed is the goodness which forbids it to do so! ‘Let me ever remember my living friends, but forget them as soon as dead,’ was the prayer of a wise man who understood the mercy of God.  Few perhaps would have the courage to express such a wish, and yet to do so would only be to ask for that release from sorrow, which a kind Creator almost always extends to us.’ (p. 25

There are six Chronicles; I am now through one third by volumes (though, like all good series, each volume is longer than the previous, and some of the later volumes are pretty honking big).  I really did like ‘The Warden

‘ has drawn me all the way in, won me over completely.  I’m enjoying my time in Barsetshire; I’m ready to go back.