God, I hated this book.

But my mother gave it to me (which is worrisome in of itself, and I am not going to unpack it here) and asked me what I thought, and it’s just a short little book and I figured: eh, how bad can it be?  Just blow through it, tell Mom what’s what, move on. 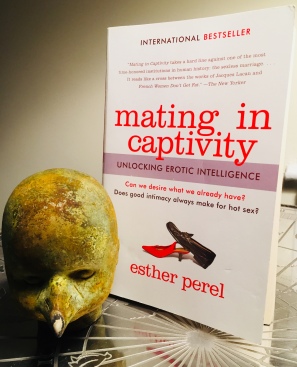 I was right about one thing: it is short.  But since it was excruciating to read, it didn’t feel short.  And since (as I have mentioned before) I have a rule about finishing books once I’ve started them, I couldn’t move on once I’d begun, and so I became sort of mired in ‘Mating in Captivity

‘, (captive to it, if you will) thrashing and miserable and unable to get free.

‘ isn’t about sex – it’s about intimacy.  This is a book about relationships, about how to maintain a sexual connection in the context of a long-term relationship.  But it isn’t exactly a self-help book.  It’s more a series of case studies: different couples, the way in which their sex life is guttering, the advice that she gave that couple, why she gave it.  How she understands the problem, why she believes that problem arises.

Let’s start with the positive: ‘Mating in Captivity

‘ is probably not a bad book.  And Perel is probably a great therapist.  She comes across as wise, and gentle, unjudgmental but also unfoolish.  She managed to write an entire book about sex and intimacy without once making me wonder what her own sex life is like, and that’s a serious accomplishment.  In fact, that’s a major therapeutic credential, and I’m honestly impressed.

I’ll also say this: she is open-minded about decisions, mistakes, and lifestyle choices which other therapists would pathologize, and I’ll bet that makes her a more effective counselor for struggling couples.

The book is clear and well-organized.  The argument is lucid and evenly applied.  I’ve never read any book in this genre at all, so I can’t say whether the thinking is totally novel, but I can say it is not conventional, and it’s probably often useful.

First of all, I hated the narrative voice.  Perel adopts a tone which is confidential and sexy: part cool aunt, part girlfriend, part romance novelist.  I feel almost bad dinging her for this, because I think I know why she’s doing it: one of the projects of her book is to remind people that sex is supposed to be fun, and so she tries to inject that fun into her language.  But you can’t force fun.  Maybe it works well in person, but on the page, you sound like you’re trying too hard.  Her writing bristles with flirtatious little locutions:

“with whom he lay in a languorous paradise” (p. 28

“feeling free to express the bawdiness of his lust with her” (p. 116

Language like this feels self-conscious to me; it makes me wince.  When I feel as though she’s trying to spice up her prose like this, I pull away from the argument.  Forget intimacy – this kind of language makes me want to avoid sex.

But, if we’re being completely honest, the more fundamental problem is that I don’t buy into the project of this book.  I don’t really understand, having read it, what it was meant to accomplish.  Was it supposed to help couples who are having problems like these?  Are you supposed to identify a couple whose problems resemble your own, and then take the advice given to them?  Are you meant to sort of wallow in the general, intimate atmosphere of the book, picking up good tips for relationship hygiene?  Was it meant to get a conversation going, encourage people to think about their own relationships a little bit more?

I don’t think intimacy works this way.  It’s not that I’m a therapy-skeptic, not at all.  On the contrary, I believe that therapy, including couples therapy, can really help people.  I’m just not convinced that reading about other peoples‘ couples therapy is as helpful.  And so this books starts to feel like Perel just…musing about relationships, laying out her general ideas about how intimate couples should and do work.

And, while she is a licensed and practicing couples therapist, I’m not sure why I’m reading that book.  While I agree with her basic values, and each chapter is coherent, I don’t feel like I really know anything now that I didn’t know before.  She is not presenting a unified theory of intimacy, and she is discussing the problems of a very narrow slice of the population.  This is a book about the normal marital depressions that affect the affluent, via specific case studies of people who are often quite obnoxious, and I wouldn’t have read that book if I had known what it was.

I really want to give Perel credit where she is due it: despite the fact that I think most of her advice is generic, on some things she is unusually open-minded, and these chapters are the most interesting.  Her stance on infidelity, which is pretty radically unjudgmental, is the best example of this, and, because she isn’t spending time blaming anyone for adultery or adulterous urges, she manages to write about those things with genuine wisdom and humanity.  And the things she says about them are interesting; I have not read them before, and I have not thought about them that way before. 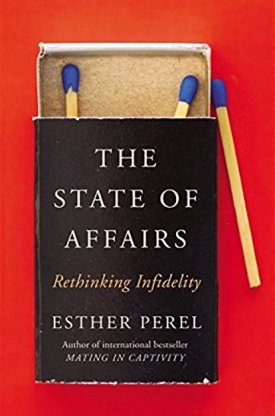 (It’s also worth noting: I was apparently not the only person who thought that Perel was at her best when writing about infidelity.  Someone at Harper must have agreed with me, because her next book, which I have not read, is called ‘The State of Affairs: Rethinking Infidelity

‘.  I would actually, despite my aversive reaction to ‘Mating in Captivity

‘, be kind of interested to read this book, which is probably the best recommendation that I can give Perel).

I think that my conclusion is this: given that the subject matter makes me want to jump out of my own skin, and that I don’t really endorse the project, it would have been a mistake for me to expect to enjoy this book.  The best that Perel was going to get out of me was a grudging respect, and this she did get.  Probably a great read for anyone who likes reading about relational difficulties, but for the intimacy-avoidant among us, ‘Mating in Captivity